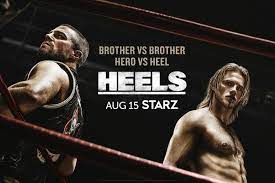 The STARZ smash hit show “HEELS” has tapped Tunedge Music for Epic Hip-Hop in their show!

HEELS–starring Stephen Amell & Alexander Ludwig–is about two rival brothers, one a ring heel and the other a hero, grappling over their late father’s wrestling promotion business while vying for national attention in a small-town in Georgia.

“Face The Music” is featured in the third episode in the wrestler’s locker room.

Click the link to check out the song: “Face The Music“

Tunedge music provides a huge online catalog of over 40,000 tracks of Artist Singles, Trailer Music, Production Music and Imaging Effects, updated weekly with new content, so our libraries never get old. Tunedge is used by such media heavyweights as Turner Broadcasting, Fox, CBS, ABC, NBC, HBO, as well as hundreds of radio and TV stations and thousands of post-production companies — even small production companies, videographers and film students use Tunedge.